In the grand old United States of America, the history of gambling has had a long and winding journey to get to where it has arrived today. With roots stretching back to the days predating European settlement, gambling in the states is deeply culturally rooted – after all, who hasn’t thought about taking a quick trip to their favorite local gambling hall or logging onto their favorite online casino from time to time? The truth of the matter is you need to know where gambling traditions come from in order to help control where they’re going. And considering the fast pace with which legislation is changing, you’ll need to jump on that bandwagon to help instill change and tip gambling laws in your favor.

Gambling existed in America long before Europeans settled the land. Native American culture had a popular, long-running tradition of betting on physical competitions. Then pilgrims sailed over the Atlantic Ocean, bringing with them card and dice games, which were always fun to play with a gamble on the line.

From that point on, gambling and gamblers remained integral parts of American society. This included soldiers on both sides of the American Civil War, the gambling women of the wild Wild West, and the miners of the gold rush! Then, in the early twentieth century, the same people that wanted to pass prohibition started a movement to outlaw gambling. It was a bad bet to make – when this law came into effect, betting of all sorts was pushed underground, into the world of organized crime – also known as the mafia. 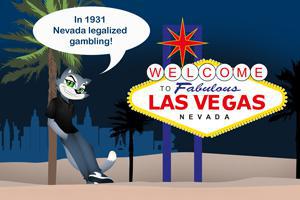 The mafia continued to cultivate the underground market until 1931, when Nevada legalized gambling. They were the first state in the history of gambling to do so and mobsters jumped on this opportunity to build up an industry that they could gain massive profits from. That’s why, in the 1950s, the mafia built up Las Vegas, making it the gambling center of the country. Eventually the city and state took the reins of Vegas back from organized crime, helping Las Vegas further blossom into a gambling and betting paradise for the average American Joe, which in turn has inspired a myriad of gambling movies, books, and TV shows around the world ever since.

As time went on, New Jersey wanted a piece of the action. In 1977, they made gambling legal, but only in one city. Atlantic City has since then become the Las Vegas of the Northeast. Then in the 1980s, the federal government gave Native Americans permission to build and run casinos on tribal property. If you live in a state that doesn’t allow big casinos but you have a local river run or cash creek by your house, then this is probably a tribal casino.
Play Now!

The different types of casinos

Gambling legislation has come a long way since the heyday of underground betting, way back when in the history of gambling. Since each state is granted the authority to form their own gambling laws, they vary greatly. Each state poses different restrictions on gambling establishments, and though most of them allow for some form of gambling, you won’t find a Vegas scale of casino resorts in every state. This is because states discern a difference between various kinds of casinos, and choose their legality based on each gambling establishment’s status.

The most widely recognized type of gambling institution is known as a “commercial” casino. Commercial casinos are specifically defined as a casino that is made and run by a private company. If you’ve ever heard of some big-time Vegas casinos like The Venetian and MGM Grand, then you can quickly recognize why they are called “commercial.” These establishments are concerned with making massive revenue and keeping it as a profit. So, by nature, this wouldn’t include other kinds of casinos like the ones built and run by Native American tribes. Since commercial casinos are private entities, they tend to get more creative and aggressive with their entertainment value and marketing tactics.

The next division of gambling establishments falls under the title of “non-commercial” casinos. It’s no secret that time and time again state governments have been hit with a slashed budget and the need to raise money. State officials try to avoid raising taxes, as unhappy constituents will vote them out of office in the coming election, so the history of gambling includes progress made by governments looking for other avenues of revenue. Non-commercial institutions include state lotteries (which help directly fund the state), charities, and Native American-run casinos. Often, contentious arguments will come up about the morality of a state not only allowing, but also running, gambling affairs.

Tribal casinos are considered their own entity because of the “independent” nation laws surrounding Native American lands. With guidelines established under the Indian Gaming Regulatory Act of 1988, tribal casinos fall under the general term “non-commercial” because they are required by law to put their revenues towards the government or a charity. This often entails building up infrastructure or developing education, funding state-operated institutions such as museums and cultural centers, or reinvesting money to support the growth and success of the Native American tribe who owns the casino.

States where gambling is legal 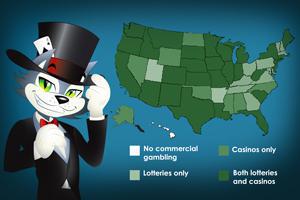 With the economic growth of modern times, a lot of states have tipped their hats into the legalized gambling ring. At the moment, 20 states (and two US territories) have allowed for the founding of commercial casinos in their states. That’s a lot more than just the one state throughout the history of gambling in the 30s, 40s, 50s, and 60s. Only two states, Nevada and Louisiana, have allowed for complete, statewide legalization of casinos. For other states, the building of these is often restricted to small, defined areas such as a specific city or county. The development of commercial casinos in Atlantic City, New Jersey is a perfect example of this geographical constraint.

In terms of non-commercial casinos, 44 states have legalized state-operated lotteries – that’s just six short of all 50 states! In the current economic climate, it’s unlikely that any state government has a large and comfortable budget. On the contrary, most states are often hard-pressed in their finances. They run multi-million dollar jackpots and scratch card lotteries to raise money for things like education and governmental development. In terms of tribal casinos, under the guidelines dictated by the Indian Gaming Regulatory Act of 1988 and the vote of local and state-level legislation, 30 states currently have legalized and founded tribal casinos.

With the rise of technology, land-based, brick-and-mortar casinos aren’t the only way to gamble now. People can log online and look up their favorite online casinos, playing a few rounds from the comfort of their homes. With the surge of interest in online casinos, federal lawmakers have had to play a game of catch-up to create legislation covering this form of gambling activity. Generally speaking, laws pertaining to online casinos are relatively strict, but this is for a few good reasons.

One of the original reasons is due to the vague definition of betting. Online gambling isn’t restricted to casino games; casino games; it can also extend over the world of sports betting. Laws applying to gambling online can seem restrictive, but a part of this is due to the fear among legislators that there could be an impact on sports, both amateur and professional. Whether this would come in the form of pressure from outside forces on the players or the increase in likelihood of rigged games, lawmakers wanted to prevent more corruption from being added to an industry where so much money was already at stake.

Another reason the legislation may seem strict is because online gambling is such a new platform for casino business. State officials want to make sure they know what they’re getting into before allowing people to create a habit out of it. For example, land-based and in-person gambling has a tradition that spans back hundreds of years, and is therefore deeply rooted in American culture and spirit. Online gambling hasn’t yet developed a place in society, so the government wants to establish control before this new aspect of the industry is taken out of their hands.
A third reason is based on the logistics of the internet. With land-based casinos, the federal, state, and local government can control where they are built, who has access to them, and how the revenue will be allocated. The government finds online casinos less profitable due to the fact that they can be based in non-local areas and all of the tax revenue these casinos would traditionally make are being diverted elsewhere. It is also harder for the government to discern which states players are from. This is problematic because it’s nearly impossible to establish state-level gambling laws.

The future of gambling 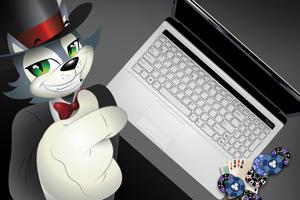 These speculations are just that: speculations. It’s important to remember that while we know plenty about the history of gambling, nothing about the future is set in stone. With land-based casinos, chances are that over time, the laws passed will become increasingly lenient. The truth of the matter is that governments are realizing more every day that casinos only mean income for the state, jobs for locals, and a healthy tourism industry. And now that the stigma surrounding the practice of gambling is fading, constituents are more inclined to vote in favor of building casinos, regardless of whether they are commercial or non-commercial.

Another conjecture on the future of gambling is that, based on the breakneck speed that technology is advancing, innovations will allow for better regulation of inter-state use of the internet. Don’t worry, this doesn’t mean censorship for you, an internet user – there are laws protecting the free internet in the United States. What it could mean, though, is that if certain states can control who uses their websites, online casinos could cater to certain areas that have very pro-online gambling laws, or distribute tax revenue based on the location of the player. If legislators feel like they can take advantage of the earning potential of online casinos, then they will be encouraged to create legislation that will benefit both their constituency and the online casinos. In the future, online gambling is most likely going to follow the same trend as land-based casinos. There’s even the possibility that soon it will not only be completely legalized, it will be promoted by the state.

Gambling has come a long way, and it still has a heck of a long way to go. The future lies in online gambling, and the best way to ensure its success is by investing in the industry while it’s still growing. CoolCat Casino is one of the most popular online casinos out there, and with just a click you can log on and take part in one of the oldest forms of entertainment while gambling on one of the newest platforms. So, what are you waiting for? Log on to CoolCat Casino, and start playing your favorite games today!

Cultural Influence on Gambling Laws around the World
How Boat Casinos Became a Thing
Online Casinos — What’s Good About ‘Em?
Online Casinos: Past, Present and Future
How to gamble and experience Vegas on a budget
Poker Legend Doyle Brunson
The ethical debate on Parimutuel Betting
The 10 Largest Casinos in the World