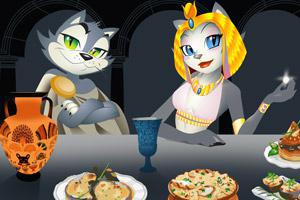 Cleopatra VII, the most famous Cleopatra of all, was the last Ptolemaic ruler of Egypt. She has for thousands of years been considered a beautiful, intelligent woman who successfully ruled Egypt and wooed both Julius Caesar and Marc Antony. While Caesar had kept his relationship with the queen quiet, Antony lived with Cleopatra in Egypt and enjoyed all the luxuries that royalty could provide. Including, on one occasion, a meal worth 10 million sesterces due to a bet – though we’re not sure whether or not it was a good bet to make.

Long ago, when Cleopatra was still on the throne of Egypt, she and her lover Marc Antony enjoyed extravagant meals on a nightly basis. When Antony complained that it was always the same thing and wondered if he would ever see anything more spectacularly decadent. Cleopatra proposed a bet that she could spend 10 million sesterces on one meal. Antony accepted.

The next evening, the servants laid out the banquet in front of the queen and her lover. Antony was disappointed – the meal wasn’t any more luxurious than the night before. When he claimed that Cleopatra had lost the wager, she told him to be patient and wait for the next course.

Now, at the moment, Cleopatra was wearing a pair of pearl earrings, which Roman naturalist and philosopher Pliny the Elder described as “the largest in the whole of history.” And just how much were each one of these beauties worth? You guessed it – at least 10 million sesterces.

Pliny describes the rest: “She ordered the second course to be served. In accordance with previous instructions, the servants placed in front of her only a single vessel containing vinegar … She took one earring off, and dropped the pearl in the vinegar, and when it was wasted away, swallowed it.” So, Cleopatra won the bet of spending 10 million sesterces on one meal by drinking a pearl and vinegar cocktail. Talk about fine dining.

While many historians believe that this story is apocryphal, the act of dissolving a pearl in vinegar is possible, proven by classicist Prudence Jones of Montclair State University when she dissolved a 5-carat pearl in white vinegar.

Adrienne Mayor, a research scholar at Stanford University’s Departments of Classics and History of Science who specializes in investigating the basis of many ancient myths, folklore, and popular beliefs said, “We already know that this curious, intelligent queen carried out toxicological experiments. It’s likely [Cleopatra] softened the pearl in advance, then crushed it and placed it in a goblet to dazzle Marc Antony with her wealth and arcane scientific expertise.”

One thing’s for sure – Cleopatra knew how to spend 10 million sesterces in style. She would’ve been amazing at the craps table, no doubt. 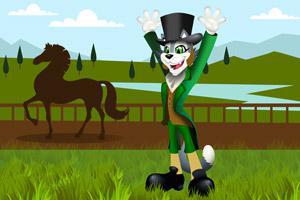 Richard Barry – also known as “Hellgate” – was the 7th Earl of Barrymore. Young and physically fit due to boxing, sword fighting, and jockeying, Barry was famous for his boundless energy and devilish practical jokes and tricks. He was also fond of gambling and would make and accept ridiculous bets that often hinged on physical prowess. In April 1790, Barry decided to make a bet that pitted him in a foot race against a man named Captain Parkhurst – while Parkhurst was on horseback. The course was a 30-yard straight track with a turn around a tree, and the race consisted of four heats. Surprisingly, the results ended inconclusively in a draw, meaning that Barry was actually as fast or faster than Parkhurst’s horse twice.

So, when a rotund butcher by the name of Mr. Bullock challenged Barry to a 100-yard race, Barry could hardly refuse the chance for easy money. There were conditions – Bullock was given a 35-yard head start, and he would choose the course. Barry readily agreed, probably already dreaming of crossing the finish line triumphantly while the heaving Bullock waddled on somewhere behind, choking on dust.

Ah, but the bulky butcher Bullock was a wily one. Bullock chose the course – not a straight track with a turn around a tree, but instead one of Brighton’s narrowest lanes. So, the race began with Bullock 35 yards ahead and Barry swiftly closing the gap. Barry caught up with Bullock easily, but because that piggy was a clever fox and the walls of the lane barely accommodated his prodigious girth, Barry found that he wasn’t allowed enough room to squeeze past and claim victory. Bullock crossed the finish line first and Barry, the guy who had won two races against a real, live horse, had to admit that he lost a foot race against a guy who took up the width of a city lane.

Brains over brawn, people. Maybe Barry should’ve challenged him Bullock to a game of blackjack instead.

Dr. Seuss, The Cat in the Hat, and Green Eggs and Ham 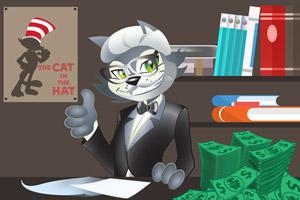 Theodor Geisel is easily one of the most widely read children’s literature authors of all time. Think you’ve never heard of him? Think again. Theodor Seuss Geisel wrote the majority of his literary works like his top-sellers The Cat in the Hat and Green Eggs and Ham under his penname, Dr. Seuss. And his two most popular works have interesting origins – they both exist because of wagers.

The Cat in the Hat started in the 1950s with Dick and Jane. School primers like Fun with Dick and Jane were boring and difficult, and kids didn’t want to read about the goody-two-shoes children they portrayed. John Hersey, a writer at Life magazine, wrote an article criticizing the dull primers and asked readers, “Why should [school primers] not have pictures that widen rather than narrow the associative richness the children give to the words they illustrate – drawings like those of the wonderfully imaginative geniuses among illustrators, Tenniel, Howard Pyle, ‘Dr. Seuss’, Walt Disney?”

Bingo. The article caught the attention of William Spaulding, the director of Houghton Mifflin’s education division, who invited Geisel to dinner shortly after. There, he proposed that Geisel create a book for small children “who had already mastered the basic mechanics of reading,” basically challenging Dr. Seuss to write “a story that first-graders can’t put down!”

But the challenge wasn’t that simple – according to interviews with Geisel, Spaulding supplied a list of between 300 and 400 words that every six-year-old student should know and limited him to the use of 200-250. The final product, The Cat in the Hat, contains 236 unique words and has sold 15.5 million copies as of 2015. Most importantly, it made reading fun for kids and brought Dr. Seuss into the hall of children’s literature fame forever.

After the roaring success of Dr. Seuss’s story about the anthropomorphic feline, Bennett Cerf, Geisel’s publisher and co-founder of Random House, bet the author $50 that he couldn’t write a successful book with 50 or fewer unique words. Since The Cat in the Hat was so successful, Geisel had nothing to lose by accepting this wager, and what spawned was only Dr. Seuss’s most popular story he would ever create.

Green Eggs and Ham was the product of Geisel’s bet with Cerf, and contains exactly 50 distinct words. Despite Geisel winning the bet, Cerf never coughed up the $50, though Green Eggs and Ham went on to sell 17.5 million copies so it was still a pretty good bet to make. Though the $50 would’ve come in handy if Seuss wanted a celebratory night at the roulette wheel. 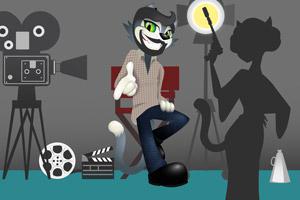 A long time ago, on a movie set far, far away, the production of the first Star Wars film was experiencing some serious issues. George Lucas, the creator and director of the space epic, was convinced that no one cared about the story, his vision hadn’t been fully realized, and the film was going to tank, all while dealing with freak weather, equipment breakdowns, and worsening health. In a moment of desperation to escape the problems that plagued him, Lucas traveled to Mobile, Alabama, where his good friend Steven Spielberg was working on another sci-fi film titled Close Encounters of the Third Kind.

In a later interview, Spielberg said, “George came back from ‘Star Wars’ a nervous wreck. He didn’t feel ‘Star Wars’ came up to the vision he initially had. He felt he had just made this little kids’ movie.”

Upon looking around at his friend’s set and seeing the project come together, Lucas realized that his movie would pale in comparison to what Spielberg had going on. According to Spielberg, Lucas said, “Oh my God, your movie is going to be so much more successful than ‘Star Wars’! This is gonna be the biggest hit of all time. I can’t believe this set. I can’t believe what you’re getting … All right, I’ll tell you what. I’ll trade some points with you. You want to trade some points? I’ll give you 2.5% of ‘Star Wars’ if you give me 2.5% of ‘Close Encounters’.” Spielberg agreed, unknowingly taking what was perhaps the most lucrative gamble ever.

Close Encounters of the Third Kind would pull in an impressive $303 million at the box office, but Lucas’s worries were proven unnecessary and almost foolish – Star Wars garnered a staggering $775 million globally, over $1.5 billion when adjusted for inflation. Of the outcome, Spielberg said, “‘Close Encounters’ was just a meager success story. ‘Star Wars’ was a phenomenon. Of course I was the happy beneficiary of a couple of net points from that movie, which I am still seeing money on today.”

In other words, Lucas was richly rewarded for his vision and his struggles, while Spielberg profited around $40 million for being a good friend. I’m sure Spielberg has since funded joint outings to the nearest casino for some friendly poker as a way to say “thank you.” 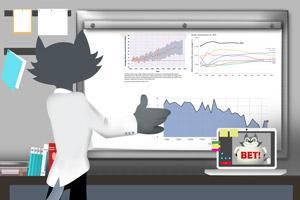 While peer-reviewed scientific journals show that 97 percent of climate scientists acknowledge that global warming is being caused by humans, there are still a number of individuals in the scientific community that just don’t buy it. Well, climate scientists and economists want climate change skeptics to put their money where their mouths are – several members of the scientific community have gained attention in recent years for making and taking wagers with skeptics about climate change.

In 2005, climate scientist James Annan made a bet with Russian solar physicists and climate skeptics Galina Mashnich and Vladimir Bashkirtsev that 2012-2017 would be warmer than 1998-2003. According to Annan’s blog: “We will compare global surface temperatures in 1998-2003 with those in 2012-2017 (6 year average in both cases), using the USA National Climatic Data Center data; if the temperature rises over this interval [Bashkirtsev and Mashnich] will pay me $10,000 (in total). If the temperature drops, I will pay them $10,000 (in total).”

Obviously the bet is still ongoing, but according to Annan’s 2015 update, it pretty much looks like he’s got it in the bag. Temperatures have been steadily rising over the past few years, so Mashnich and Bashkirtsev have had plenty of time to save up.

As expected, Hope won his bet with Plimer and Rudge and lost his bet with Annan, so collected £2,000 from the skeptics and paid £666 to his fellow climate change scientist. Here’s hoping that more climate skeptics step up, continue to lose money, and finally shut up. Or that we do something about climate change so the temperature starts dropping instead of continuing to rise. One thing’s for sure – betting on the world getting warmer is still a good bet to make.

Ready to make a good bet? Try out your luck today at CoolCat Casino!