Gambling is always great fun and has been for a long, long time.

How long is gambling history?

The very first instance of gambling ever recorded goes back to pre-historic times, in the days of the dinosaurs. How do we know? Watching The Flintstones, of course.

In all seriousness though, archaeologists and historians have argued that games really do date back to pre-historic times. Some, like the Dutch cultural historian Johan Huizinga, have argued (in his 1938 book Homo Ludens), that games were a primary condition for the generation of human culture and the starting point for complex human activities such as language, law, war, philosophy and art.

In pre-historic times, ancient gaming implements were usually made of bone and believed to have been used for games similar to what we know today as jacks and playing dice. A series of small, carved, painted stones, discovered at the 5,000-year-old Başur Höyük burial mound in southeast Turkey, may well represent the oldest surviving gaming pieces ever found. Two game boards found in the Royal Tombs or Ur in what is now Iraq in 1920 are said to be a game played by Kings dating back to about 3,000 BC. Babylonian writings found on a clay tablet describe the game and show it had astronomical significance and could also be used to tell one’s fortune.

Clearly gaming has come a long, long way. Today there’s nothing like a night out at a casino when you’ve got a sweet little bankroll to work with and hitting the tables to play blackjack, roulette, poker or just have fun with the slots. And, if you’re like us, you play for fun, though a bit of good fortune never hurts! Winning is icing on the cake, but the real fun involves hanging around with friends and enjoying your time.

But who says you actually have to gamble to have fun? Just talking about it can be a blast. So, let’s do that. Today, we’ve got some fun gambling facts you probably never knew. Enjoy!

Have You Ever Seen a Royal Flush in Poker? Consider Yourself Lucky! 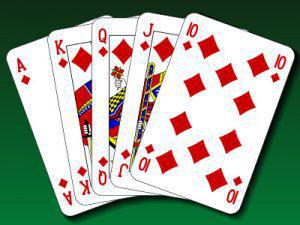 Did you know that the odds of hitting a Royal Flush in poker are 1 in 649,740? That seems like crazy bad odds when it comes down to it. And as a result, you might think that you’ll never see one playing poker live. I mean, that’s a lot of games of in-house casino poker you’d have to play for the chance unless you’re uber lucky. The odds of seeing the Queen of England in your living room are probably higher. But they do pop up online way more than you think. That’s because while you might play an average of 10 hands of poker an hour (it takes time to shuffle, deal, and actually play out the hand), you could very well end up playing 60 or 80 hands of poker online at various internet poker sites. We don’t offer online poker at CoolCat Casino, but we do have video poker. And since the game is fast, you might hit that Royal Flush more often than you think.

The number of unique possible poker hands is…
Well, a traditional 52-card deck contains 2,589,960 unique five-card hands. Seriously. With the odds of a single pair showing up in any one hand at 42.26%. Yes indeed, it’s a big wide world when it comes to possibilities and cards.

So, What Do Card Suits Actually Represent?

Traditionally the pictures on playing cards were designed to represent the social order, with royalty at the top, nobility below and the ranks of working classes underneath. The consensus is that playing cards were first invented in Imperial China in the 9th century. Some even believe that the earliest playing cards were also a form of paper currency, used both to play the game and as the stakes the game was being played for.

Cards were, and those we use today still are, divided into four suits consisting of three face cards and numbered “pip” cards. A form standardized in Mamluk Egypt in the 13th century.

The actual suits we use today: hearts, diamonds, clubs and spades, date from the Ancién Régime in 15th century France.

Not long after the French suits caught on, manufacturers in German speaking lands began to experiment with playing card designs:
– keeping hearts but exchanging
– bells for diamonds,
– acorns for clubs, and
– leaves for spades.

Did you know?
If you travel in Central Europe today, in Germany and the lands under its traditional sphere of influence, and pop into a local put for a beer, you’re likely to see the “stamgast” or local regulars, playing contemporary card games using funny looking cards with these suits. 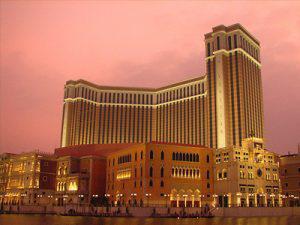 The obvious temptation would be to say it’s one of the mega-resort complexes built in Las Vegas over the last 10 years or so, you know the ones where you can walk over a quarter of a mile from your room to the outside doors? I mean everything in America is bigger, better and badasser… Surprisingly, while there are truly massive casinos in Vegas, the world’s biggest is actually in Macau, China’s special gambling enclave.

The Chinese love to gamble and Macau is the world’s gambling Mecca, with more money being wagered in Macau in a day than in Vegas in a week. Okay, this probably shouldn’t come as too much of a surprise, I mean China has a lot of people, a whole freaking lot of people. To put it in perspective, the population of China, at 1.38 billion in 2017, is larger than the population of North America, South America, Australia, New Zealand and about 1/3 of Europe combined. That’s a lotta folks, folks. And they love to gamble.

The world’s biggest casino is the Venetian in Macau. Coming in at an astonishing 10.5 million sq. ft. (the casino alone is 550,000 sq. ft.), it is the 5th largest building in the world and holds 3,400 slots and 800 gaming tables, wow! Compare that to the largest U.S. casino, the Foxwoods Resorts Casino in Mashantucket, Connecticut, on the Mashantucket Pequot Indian Reservation, which comes in at 9,000,000 sq. ft. (the casino is 344,000 square-feet) with over 380 gaming tables and more than 6,300 slots. Unsurprisingly, Vegas has the second largest casino in the US (and the 8th largest in the world), the MGM Grand, anteing up at 171,500 sq. ft. with over 2,500 slot machines and 139 table games.

Okay, CoolCat Online Casino is a far cry from these ginormous gaming spaces but if you’re the type who still likes a bit of privacy but all the fun and excitement from the comfort of your own home, CoolCat Casino has what you need!

That’s right, so you get lost. If you were to snap a bird’s eye view of a casino, it’ll actually appear like a maze. The slot machines are set up at various angles so that you’ll have trouble finding your way out. Casinos want to keep you inside gambling, not outside where your money stays in your pocket. Thankfully, we don’t keep you from leaving at CoolCat Casino. In fact, since everything happens on your Mac, PC, smartphone, or tablet, feel free to play from the park for all we care. Or even a corn maze if you feel so inclined.

The Oldest Casino Game Is…

The oldest game game is most likely dice or some form thereof, again going back to pre-historic times. But the oldest casino game is another story. The word casino is of Italian origin. Its root is casa (house) and it originally referred to a place where people would gather to socialize, usually a small summer or country house. By the 19th century the word casino was being used to denote places where people met to socialize and engage in pleasurable activities, such as drinking, listening to music, gambling and sports.

A word of warning
But watch out if you’re travelling to Italy. Today casino means bordello (aka house of prostitution) and proper casinos, that is gambling houses, while still almost spelled the same, take an accent on the o, casinò.

The oldest casino is said to be the Ridotto in Venice, Italy. Set up in 1638 by the local government to provide controlled gambling during carnival season for affluent Venusians, it’s primary games were biribi, a sort of lotto and basetta, a cross between blackjack, poker and gin rummy.

The first true casino game, at least a game we would recognize immediately today, was… wait for it… roulette! Roulette first took off in France at the end of the 18th century. The game was brought to America by French fleeing the terror of the French Revolution and adapted to what we know to be American roulette, today. By the early 19th century, roulette was all the rave in Paris and casinos across Europe, specifically Monte Carlo.

Do Casinos Have Clocks?

It’s always 9pm inside a casino. Or so you’d think. Casinos are set up to ensure you lose track of time. There are few windows and no clocks, so you need to rely on your watch or smartphone to figure out what time it is. The idea is to help you lose yourself and your bankroll. Casinos keep the drinks flowing to keep you loose with your money and playing away. There are few windows, and the ones there are, are usually tinted to keep you from seeing the light of day.

The lobbies and restaurants are lit to look like your living room, to make you feel warm, comfortable and at home. The casino floor is filled with bright flashing lights to give you a feel of excitement and make you think everyone around you is winning all the time.

In the mood for gambling? Avoid casino pitfalls and step into the real fun right here at CoolCat Online Casino. Enjoy your favorite games now from anywhere you like. And remember, there’s a clock right at the top of your smartphone, at the top of your Mac, or at the bottom of your Windows machine, so you’ll always know when it’s time to say goodnight.