Pachinko: The ins and outs of Japan’s favorite gambling pastime

Growing up in the ’80s was awesome. It was a simpler time. No iPads. No constant social networking communication. Instead of playing Angry Birds, we actually played outside and got angry when it would rain.

That’s not to say that I spent all my time outdoors. Nope, when I wasn’t playing baseball outside or riding my bike with friends or hoping to get into Goonies style mischief, you’d find me, and lots of kids like me, at the local arcade. 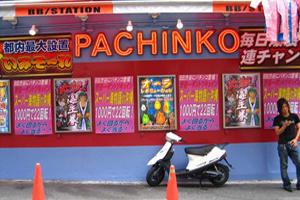 My game of choice? Pinball. Any kind of pinball. Spider-Man pinball. Non-themed pinball. Whatever. I loved the non-digital experience offered by letting you take full control of the game. It’s just you, a metal ball, a pair of flippers, and a dream.

You can still find pinball machines today but they aren’t as ubiquitous as they once were. Unless, of course, you head to Japan, which is exactly what I did a few months back.

Imagine my surprise when I went to an entertainment complex in Tokyo and saw people sitting down playing pinball. Well, it looked like pinball, except you usually stand up. And something else was a bit different. From a distance, it looked like people were playing slots.

Was it a slots game? Was it a pinball machine? It turns out it’s both.

Pachinko is a mechanical game that got its start in Japan. It’s part arcade game and part gambling device. It’s almost like a slot machine in that that the results are random. And it’s like a pinball machine in that it involved a mechanical ball. However, unlike traditional pinball, there are no flippers present to push the ball back.

You’ll find Pachinko at places in Japan that look and feel a lot like a North American casino. Rows of machines, resembling slots. Cocktail waitresses asking you if you’d like a drink. Brightly colored carpets that would be out of place anywhere but a casino. 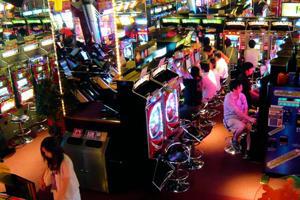 Except gambling is illegal in Japan, so Pachinko technically isn’t gambling. Here’s how it all works.

First, a player fires a set of balls into the Pachinko machines. The balls move through a bunch of pins. Think of it as the Price is Right game, Plinko, where the contestant stands at the top and pushes down discs into a desired spot.

The object of Pachinko (which sounds like Plinko) is to grab as many balls as possible. Basically, when you shoot the balls, it could result in more balls being released. At the end of the game, you’ve got a bunch of balls, instead of money, which makes it a non-gambling experience and therefore legal by Japanese standards.

So what do you do with all those balls? You can exchange them for prizes. They could be simple as pens or tobacco lighters. Or they could be big-ticket items like electronics, bicycles, and more.

Pachinko is a lot of fun and I admit I spent a good few hours playing the game with friends. And this is coming from someone who much prefers table games to slots. While you can’t find Pachinko online at CoolCat Casino, you can find lots of other games involving balls, including Roulette, so hop online and find something new.