What Makes Progressive Slots So Attractive?

A progressive slot machine offers a jackpot that increases every time a player drops a coin into the machine. There are fixed jackpot slots, which offer a fixed amount to be won. But these aren’t nearly as popular as progressive slots, and here’s why!

A Brief History of Slots

The old fashioned slot machine, with its clanking and jangling reels, only offered a fixed jackpot. This was a predetermined amount of coins that would be released only after a certain number of coins were fed into the machine. Usually, the machines could be set by the casino to be either ‘loose,’ which paid out fairly often, or ‘tight,’ which paid out rarely. The common 3-reel slot featured a limited number of symbols, which limited the amount which could be won on any given machine. This made the machines both boring and financially risky, earning them the nickname ‘one-armed bandits.’ The single lever on the side of the machine was its ‘arm,’ and the machine’s ability to empty your wallet like a bandit, cemented the unflattering image.

In the 1980s, as computerized video arcades were popping up everywhere, a new type of slot machine arrived on the casino circuit: the video slot machine. This machine used computer-generated symbols which took the classic form of fruits, bars, and wild symbols, or video poker. The higher amount of symbols and cards in the video slots provided even greater combinations of winning (or losing) opportunities, which allowed for more regular low payouts to increase interest. Eventually, this led to jackpots which could be calculated, displayed, and won. 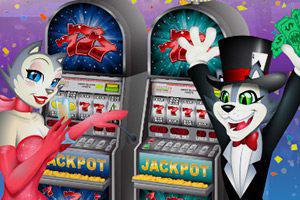 As slot machines grew in complexity, so did the types of possible jackpots. Early machines had fixed jackpots, or set amounts that would pay off once in a blue moon. But when progressive slots burst onto the scene, a new type of slot fever gripped the player. With every coin pumped into the machine, the jackpot meter grew. The biggest casinos capitalized on this in a big way, and soon the progressive jackpot slots took center stage. And there was always an 800-pound gorilla machine in the room. The machine with the largest progressive jackpot had the biggest, flashiest display of the growing jackpot.

The standalone progressive slot machine was the first type of progressive slot. Each machine had its own progressive jackpot, which grew according to the amount of player traffic and coins the machine received. Since the jackpot grew whenever it was not won, the growing number increased the expectation of an impending win. With the advent of computerized video slots, a series of slot machines could be networked together to feed one progressive jackpot. This caused the jackpot—and player interest—to grow much faster.

Local progressive slot machines were linked only within a particular casino, but eventually, wide area network progressive slots came onto the scene. These types of slots connect multiple machines from casino chains operating across an entire region or state. This allowed for astronomically large progressive jackpot amounts, upwards of over $10 million per jackpot. And as the jackpots grow, the temperature scale of slots fever rises. The size of the win compared to the small amount of coin investment required, has made slot machines the most profitable games in the casino – accounting for 70% of their income.

As slot players feed the machines, the jackpot grows incrementally until somebody wins, then the jackpot starts again at zero. It’s important to remember a few basic facts about probability, payout odds, and jackpot rules. Only a fraction of the coins pumped into a particular machine or a network of machines actually contributes to the overall progressive jackpot. This amount varies per game and according to the limits set by the casino. Remember, the casino always has a house edge, so a percentage of what players pump into the machines will always go into the casino coffers, even after somebody wins a colossal jackpot. Even after a $10 million jackpot is won, that money came out of the pockets of fellow slots players, not the casino.

Basically, progressive slots operate like a lottery. The millions of people who lose, end up paying the winner the colossal sum. But the chance of winning a mountain of moolah is just too tasty to pass up, especially when you are only pumping in coins, not hundreds of dollars at a time. However, keep in mind that all those coins add up, and you can quickly go broke if you play dollar slots all day for weeks at a time. Just like the odds in a lottery, the odds of winning a progressive jackpot are astronomically low. But some clever players are always trying to find a way to game the system, by playing to beat the odds.

A player who makes a living from gambling needs to find an advantage. On the blackjack table, this means memorizing charts of winning and losing odds, proper moves for each hand, etc. Really skilled players even count cards (which is technically not illegal), but it’s a surefire way to get you ejected from a casino if they even suspect you are counting cards. Poker is played in a different way, and advantage players use card playing skills plus psychology to predict what the opponent has, and to bluff in case of a lousy hand.

It is possible for a slots player to find an advantage over the casino, but this is extremely difficult. A player would have to know the pay table of a particular machine or group of machines, and casinos do not want to publish this information. With video poker slots, the odds are slightly easier to predict if the slots pay out according to the same odds of winning hands in a 52-card poker deck. However, it would take thousands of plays to generate the winning hand, which is why some players organize groups to play as a team. Team members work in shifts, all day and all night, and call in other players to relieve them. At a land-based casino, when the seats are always filled by members of a team of advantage players, this gives an unfair advantage to the team. It also means individual players have a lower chance of winning.

Team playing is discouraged by casinos, and they watch out for this behavior using the same Eye in the Sky that provides video feeds to casino security. But this scenario cannot occur with online progressive slots. The only ‘seats’ are the chairs of the home player, and these are generated randomly with each player account, and each time a player starts a new slots game. This keeps all the ‘big kids’ from hogging the seats, and gives maximum advantage to random chance. This works especially well when the online casino has a random number generator (RNG) built into the software. This ensures fair play to everyone who plays online slots for real money.

Bet Max Coins for the Jackpot

Another way the casino benefits is by the minimum jackpot betting requirement. Read the slots rules carefully and you’ll find that you will not win the jackpot unless you bet a specific minimum amount on each spin. In land-based casinos, most slots are separated by coin size, from the nickel slots of the old days, to the dollar (and higher) slots of modern times. However, nickel slots don’t usually pay jackpots. When playing slots online, check the payout rules for each slot game and each online casino. You’ll find that you can change your wager amount from 1 up to dozens of coins per spin. You will not win a progressive jackpot if you bet only 1 coin per spin, which is why online casinos recommend betting the maximum amount of coins per spin.

So while progressive slots are very attractive due to the massive amounts of money in the jackpot, keep a few basic rules in mind when playing. Probability doesn’t change. The odds of winning the jackpot are still millions-to-one against it, regardless of the amount flashing on the jackpot meter. But eventually, somebody wins the jackpot and it changes their life forever. And this is why we gamble. Who doesn’t want a major change in fortune with the flip of a card or the spin of a slot?