Many people have tried and failed at out-doing casinos over the years, but there are a select few who have actually gotten away with it in the past. These scams have been pulled off to the extent where the culprits and ringleaders have taken millions of dollars away with them, and never been caught. But, no matter how much of a genius you think you may be on the blackjack tables or how good you are at counting cards; hustlers are always likely to get found eventually – which is exactly why we wanted to look at the different types of scams attempted throughout the years, and what happened to the scammers when they were later discovered.

According to sources, poker champion Phil Ivey was caught edge sorting on a Baccarat game in 2014, racking up a total of $9.6 million. Edge sorting is essentially ‘card marking’ as it requires the gambler to pay close attention to the cards with imperfections being played in the game. Ivey used this tactic when he noticed some of the cards (such as the diamond shapes) had a slight defect on them. He then instructed the dealer to turn over the “good” and “bad” cards to help him decide where he would place his bets. Although this method technically isn’t considered cheating, it is very much frowned upon by casinos and The Borgata even filed a lawsuit against Ivey. Apparently it remains unsettled to this day!

At the famous Ritz Casino, London in 2014 – 3 Eastern Europeans successfully pulled off a scam which saw them walk out with £1.3 million, after they used special, laser-scanning technology in their phones to predict where the ball would land on a roulette wheel. The method is also known as ‘sector targeting’ because the technology uses figures based on the ball’s speed, enabling the players to make swift calculations and place their bets before it makes its final rotation and lands in the winning pocket. Amazingly, because ‘sector targeting’ isn’t considered as cheating in casinos, the scammers were able to keep every last penny of their winnings and dodged all charges. 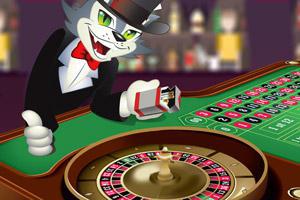 Another famous ring of scammers were known as the ‘Cutter Gang’ – who allegedly cheated the system into splurging out millions during a game of Baccarat in 2011. They pulled it off when one of the players used a hidden camera to see the card values after the deck was cut. Once he gathered this information, he excused himself from the table so he could relay his findings back to another member of the group, and they soon ended up with winning hands on every game. They were caught doing the same act at another casino in Vegas, and were soon detained for their suspicious $1 million win, but later released without charge after authorities found no evidence.

This next one involves a crime ring of New Yorkers who scammed a casino in Ohio during a roulette game. The gang was made up approximately 50-70 people, who would play games using chips as low as $1. During the games, they would carefully pocket more high value chips whilst other members distracted the croupiers and dealers. After successfully pulling off the con in 4 different Ohio casinos, they were later discovered and arrested by state police, pleading guilty once in court. It is estimated each event saw the gang pick up between $1-2k, but nobody knows if there were other cons pulled off prior to their arrest.

This scam was carried out using casino kiosks, using only a bank card! A gang of conspirators collectively attempted to steal over $1 million using casino kiosks dotted around Nevada and California in 2012. The con involved exploiting a fault in casino kiosk security by opening up a multitude of different Citibank accounts, then visiting several casinos and using their kiosks to withdraw up to 10 times the amount deposited within a 60-second window. It worked well for a while, but the gang were eventually discovered and convicted of 14 separate cases of fraud. This resulted in each member receiving up to 5 years in prison, as well as a $250,000 fine. For the group’s leader Ara Keshishyan – he faced up to 30 years in prison and $1 million fine for each account.

A genius attempt at scamming a casino happened in 2011, where 3 Italians and a Frenchman successfully raked in 64,000 euros using an invisible ink pen and contact lenses during a game of stud poker. It is said, the Frenchman marked the cards with the pen, and the Italians would then be able to see which cards were the tampered ones. As brilliant as the idea seems, the con-artists didn’t put much effort into making it look very natural or inconspicuous – so when the casino eventually copped onto the men’s unusual winning streak, they alerted the authorities and the men were handed a long-haul jail sentence.

One of the biggest manipulation acts of all time took place in the US, by a man named Phuong Quoc Truong (or as many refer to him as ‘Pai Gow John’) who put together a formation of illegal card counters, by traveling over to the states and convincing casino dealers and bankers to cheat on his behalf. The scam involved 30 accomplices in total, and the rogue dealers would give the other players in the game the impression that the pack was being shuffled, simply by pressing the corners of the pack together to create a “shuffling noise.” During this time, the main player in on the scam would smoke a cigarette, whilst sneakily relaying the info about the cards dealt to the normal players through a hidden microphone. Once instructed, the smoker then places his fingers on the cigarette in a certain way for alerting the other players to make their bets. The group managed to make a total of $7 million over 25 various casinos before they were eventually caught by one, and sent to serve prison time.

#2 – The cigarette of deceit

In 1973, a trio of gamblers at the Casino Deauville in France, managed to pull off one of the biggest roulette scams in history. One of the trio members was actually a roulette dealer, and the other 2 accomplices were his brother in-law and his very good-looking sister. The scam itself involved a radio transmitter tucked into a pack of smokes, and a weightless receiver inside a roulette ball. The brother-in-law acted as the clueless, innocent player, whereas the sister was in charge of pushing the button on the transmitter when the ball began to spin. The method was always 90% accurate, and in just one week the trio had already raked in the equivalent of $1 million. It was only when a casino owner took a shine to the beautiful sister and began to watch her more closely that he noticed her suspicious behavior, and the fact she was always in the casino at the time the largest wins occurred. After several theories, he concluded radio interference was being used and ordered a full debug sweep of the floor. They found the evidence they needed, and the trio were eventually arrested.

At number 1, we have the casino heist straight out of the film Ocean’s Eleven. Only it was actually a great success and didn’t quite involve all of the explosives and SWAT teams. An Australian man managed to take over $33 million AUD ($30 million USD) from the Crown Casino in Melbourne in 2013. Officials as well as the casino are still scratching their heads to this day, about how he managed to pull the stunt off. It is believed he hacked into their surveillance cameras completely undetected, whilst an accomplice on the gaming floor, was fed information through an earpiece on which bets to play. Although the man has never been caught, the Crown Casino are still optimistic that the money may be returned… but for a scam that took place over 5 years ago, it is highly unlikely.