European or American Board Games Styles?

A few weeks ago, I was sitting at a dinner table with five other guys when suddenly a whole discussion about board games emerged out of the blue.

The polemic discussion was about the different styles of board games that exist: the European and the American styles. At first, I wasn’t that much interested in the conversation; however, as it progressed, I learned that there’s a lot of people who really care and pay attention to these two different styles of board gaming. And being the geek that I am, and being as obsessed as a I am with games, well I decided to investigate on the subject and share it with you all. 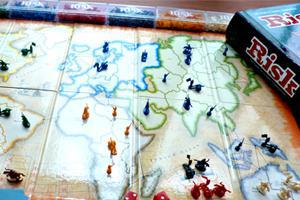 The American style of board games is best defined by the game of Risk which means that strategy is by no means absent, but risk-evaluation rules the day. It exemplifies the American style by being a luck-dependent highly competitive game with military themes.

American-style games tend to involve large elements of random chance: dice are the most common agent of chance, but decks of cards can contribute as well.

These games tend to emphasize the American value of competition between players. Players are making moves in direct opposition to each other: they are playing against each other, not just competing at the task that the game has presented. In this regard, player elimination is often an element in these games.

The American games have a focus on military themes that goes hand-in-hand with the previous one, but it’s worth noting that most of the time, if you’re controlling an army and conquering other player’s territories, you’re playing an American-style game. 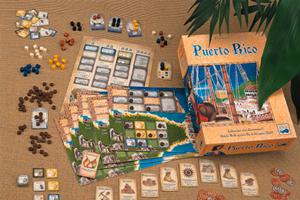 European-style games tend to attempt to eliminate luck or chance from their games. This puts the emphasis on strategy and efficiency of move choice. Puerto Rico includes no dice or random cards, each player’s moves are selected from a pool of those available and the only truly random element is player order, which is somewhat mitigated by handicaps and a rotating round system.

The European styles have player inclusion, whereas American-style games often have players sitting out before the game is resolved and the end-game contenders apparent from an early stage, European-style games aim for the maximum level of inclusion for all players. This goal is most often achieved with the notion of victory points.

Since the players are competing against a system of game mechanics and goals to earn points instead of attempting to eliminate the other players, everyone gets to play until the end (and often, the points are hidden so that the winner is not apparent until after the game has resolved).

Many games (like Puerto Rico or Power Grid) have a mechanic to keep competition tight until the end by adding handicaps or lag-advantages by having certain actions resolve in reverse order. In Power Grid, the player with the least amount of points gets first choice of resources and city placement.

Believe it or not, the European board games then to have economic themes. It has already been talked about, but if you’re playing a game about resource management or opportunity cost or any other economic principle, chances are, you’re playing a European-style game.