While China’s special administrative region of Macau is recognized as the largest gambling hub on the planet, the mainland is most certainly a different story. To put it simply, gambling of all kinds is highly restricted throughout the Asian nation. With that fact in mind, you can imagine my surprise when, during an exploration of the southeastern city of Guangzhou, I noticed a common and recurring chain of establishments with English signs that read “China Welfare Lottery”. 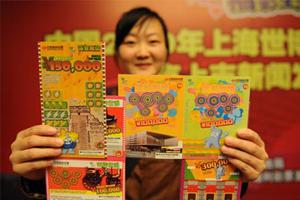 Feeling ambitious after a long night at the bar, I decided to try my luck at one of these establishments, and what I found inside was a definitive reminder of local casinos around the world. While not exactly slot machines, the China Welfare Lottery location was filled with red gambling machines that appeared to be similar to video poker. Unfortunately, my Mandarin is a bit abysmal, so the exact rules of the interesting gaming machines remained a mystery. However, while these machines did attract a player or two on that particular evening, the main event of the Welfare Lottery seemed to center around a large whiteboard at the front of the single-room storefront covered with a grid of numbers and Chinese characters.

I later found out that this board showed recent results of one of China’s only legalized gambling opportunities and the namesake of the building itself: the China Welfare Lottery. Run by the China Welfare Lottery Issuance Center, this unique contest has been in operation since June 1987. Like western lotteries, the Welfare Lottery is used as a fundraiser for worthwhile causes. In this case, funds are provided to the country’s social welfare funds, including disaster relief and welfare works. 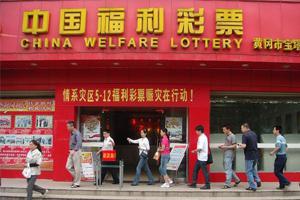 While the rule sheet is a little harder to read if you don’t speak the local language, the rules of the Welfare Lottery will be familiar to those who’ve participated in lotteries in other locales. Simply choose six red balls, which range between one and 33, and one blue ball, which includes numbers one to 16. If you don’t feel like choosing, the Chinese lottery also offers quick pick options, similar to those of many lotteries around the world.

The prize structure for the China Welfare Lottery includes six unique tiers, as well as the jackpot. By matching just the blue ball, you’ll lay claim to a tidy sum of 5 RMB ($0.78), but the prizes quickly escalate with more correct picks. Match five red balls and the blue ball to win 3,000 RMB ($470).

While the lottery hasn’t been completely free of controversy in the past, it remains a viable source of funding for welfare organizations throughout China. In addition to employing nearly 75,000 people, the lottery is available to approximately 95 percent of the country’s massive population of 1.36 billion.

Despite a lack of traditional casinos, Mainland China demonstrates the considerable upside of gambling through the operation of the China Welfare Lottery. For players in this lottery, the opportunity to win big is just a bonus on top of the chance to help fellow citizens and promote a stronger sense of community.