If you’re new to playing video poker, it’s crucial to have a solid understanding of the different hands and how you can achieve them. All payouts are dictated by the combinations of hands in this game, and as there are so many different variations of video poker, these amounts can vary quite often. This is why we’ve outlined all of the hands you will come across in video poker, along with where each one fits into the paytable.

Royal flushes are the most coveted hands in any variation of video poker. These powerful combos can see you earn a payout of up to 4000 coins on a full pay game of video poker. A royal flush consists of a five-card hand of 10-J-Q-K-A, which must be of the same denomination.

A royal flush tends to pay out around 200 to 300 times your bet and in a variation like Jacks or Better, royal flushes award 250x times your bet. It’s worth noting that practically all versions of video poker provide a bonus for scoring a royal flush. This is only when you’ve wagered the maximum number of coins, though.

It’s also worth keeping in mind that in progressive video poker games, the jackpot is paid out to the first player who hits a royal flush. Certain versions of video poker require the cards in hand to be in sequence, aka, 10-J-Q-K-A, to be eligible to win the jackpot.

While the probability of achieving a royal flush on the first deal is around 1 in every 649,740 hands, drawing cards and scoring a royal throughout any point in the game gives much more favorable odds of about 1 in every 40,000 hands. 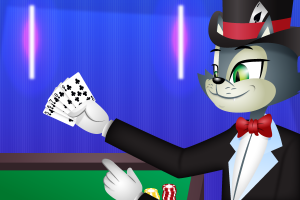 A straight flush is the next best hand you can achieve in any game of video poker. This is a hand that consists of five cards of the same denomination that appear in a sequence (except a royal flush: 10-J-Q-K-A). An example of this hand could be something like 3-4-5-6-6 of diamonds.

Straight flushes typically award a payout between 40 and 60 times your original stake. A payout of 50 times your bet is paid out for a straight flush in games like Jacks or Better. On the first deal, the probability of hitting a straight flush around 1 in every 72,000 hands. These odds increase considerably when a draw is included.

Four of a Kind

Next up is four of a kind, which is the third-best paying hand in video poker. This hand is exactly what it says on the tin and consists of four cards of the same suit. An example of this hand could be K-K-K-K-8.

In most video poker games, four-of-a-kind hands usually pay out around 20 to 30 times your betting amount, and 25x in games like Jacks or Better. The probability of hitting a four of a kind on the first deal is about 1 in 4,000 hands. Like the other paying hands, the odds became more favorable when the player draws.

A bonus that four of a kind offers that the other hands don’t is a higher payout for a combination of four deuces. In games like Deuces Wild or Looses Deuces, the payout for this hand is 200x your bet. 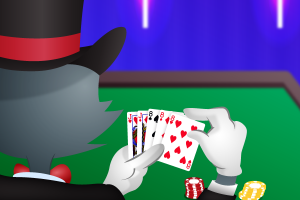 The fourth best possible hand is a full house. This hand needs to include three of one card and two of another, i.e., 6-6-9-9-9 of any suit.

In most video poker games, full houses usually pay out up to 9 times your bet, including in games like Jacks or Better. However, some Jacks or Better games only pay out 8x your bet if they aren’t full pay machines, which is why it’s worth checking the paytable of any game you choose to play beforehand.

The probability of hitting a full house on the first deal is 1 in every 700 hands, and the odds increase significantly when a draw is included.

The fifth best hand in video poker is a flush. This hand needs to consist of five cards of the same suit in no particular order. An example of a flush would be 2-6-4-K-A of spades. Bear in mind that scoring a hand with a 5-6-7-8-9 of spades wouldn’t be a flush because the cards are sequential — making it a straight flush.

These hands typically pay out between 4x and 6x your wager and 6x on a full pay version of Jacks or Better. On Jacks or Better games that aren’t full pay, the payout for a flush is 5x. The probability of making a flush on the first draw is 1 in every 500 hands. 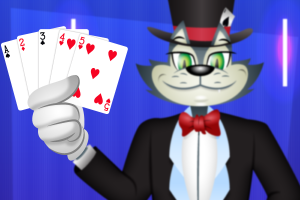 Straights are the sixth-best hands in all variations of video poker. This consists of five cards in a sequence of various suits. An example of a straight would be 2-3-4-5-6. If the cards are all of the same suit, the hand would be a straight flush.

These hands typically award between 3x and 4x your original stake and a payout of 4x in games like Jacks or Better. The probability of achieving a straight on the first deal is 1 in every 256 hands.

Three of a Kind

This hand typically pays out 3x your original stake in games like Jacks or Better, plus most other non-wildcard variations of video poker. The probability of achieving a three of a kind on the first deal is about 1 in every 50 hands. 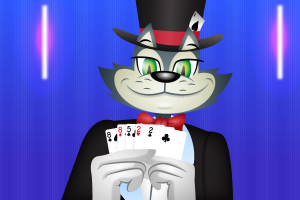 The eighth best hand is a two pair. This hand also consists of what it sounds like and needs to include two individual pairs of different cards, i.e., 4-4-J-J-7.

The payout for a two pair is 2x your original stake in games like Jacks or Better, plus most other non-wildcard variations of video poker. The probability of achieving a two pair on the first deal is 1 in every 20 hands.

The ninth-best and easiest paying hand you can score in video poker is a pair.

A pair is the minimum needed to score a payout in video poker and must include two of the same card of any suit, i.e., J-J-3-7-4.

This hand typically awards 1x your wager amount in most variations of video poker, which means you’ll get even money. It’s worth noting that not every pair pays out, and the pair usually has to include a pair of Jacks or higher in most games. In Tens or Better, a pair of tens is needed to qualify for a payout.

The probability of achieving a pair on the first deal is approximately 1 in every 2.381 hands. The odds increase considerably when you include a draw.