Australia is one of the most fire-prone regions on Earth, and bushfires in Australia are a regular occurrence. For millions of years, lightning strikes would ignite dry grass and purge huge patches of terrain of all life. But as the Earth slowly grows warmer and droughts become increasingly common, major disasters like the Australia’s bushfires of 2019/2020 will only get worse. Add record-breaking high temperatures to long drought conditions and dry winds, and you have the perfect conditions for a major bushfire.

Over millions of years, Australian plant life has grown so accustomed to regular bushfires that it has evolved to adapt to it. The Eucalyptus tree has specifically adapted its life cycle to be resistant to fire – and even depends upon it. When the outer bark burns, it releases new shoots from under the bark layer.

However, animals have not been as successful at adapting to the fires. The slower land animals like the koala can only run 2mph – hardly fast enough to evade a wildfire moving 14mph. The tragic reason for the death of so many koalas is that they tried to avoid the fire by climbing up to the tops of trees – but the fires eventually reached them. According to wildlife experts, over one third of Australia’s koala population has been destroyed by the bushfires. 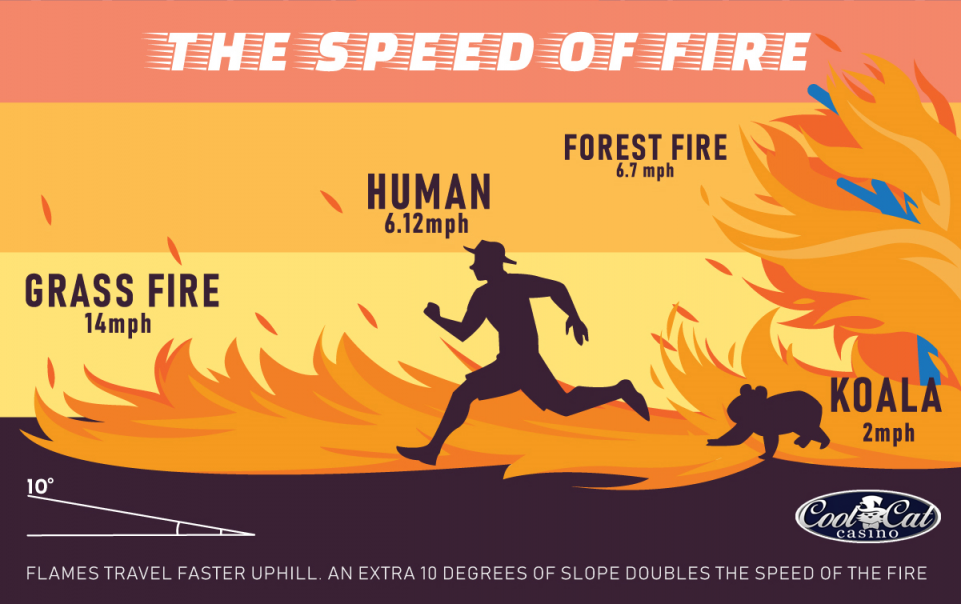 Explorer James Cook referred to Australia as ‘this continent of smoke’ while he was charting the east coast in 1770. The fires witnessed by Cook and his crew were both natural and man-made. Lightning strikes ignited dry grass and forests, but Aboriginal peoples also set fires to manage the harsh landscape for thousands of years.

The indigenous Australians used fire sticks to drive prey from bushes while hunting and burned fire breaks to separate large areas of grass from each other. This resulted in smaller bushfires that were easier to contain because the fire breaks prevented them from spreading. But when the European settlers started practicing fire suppression instead of prevention, larger areas of forests and grasslands dried out and became serious fire hazards. 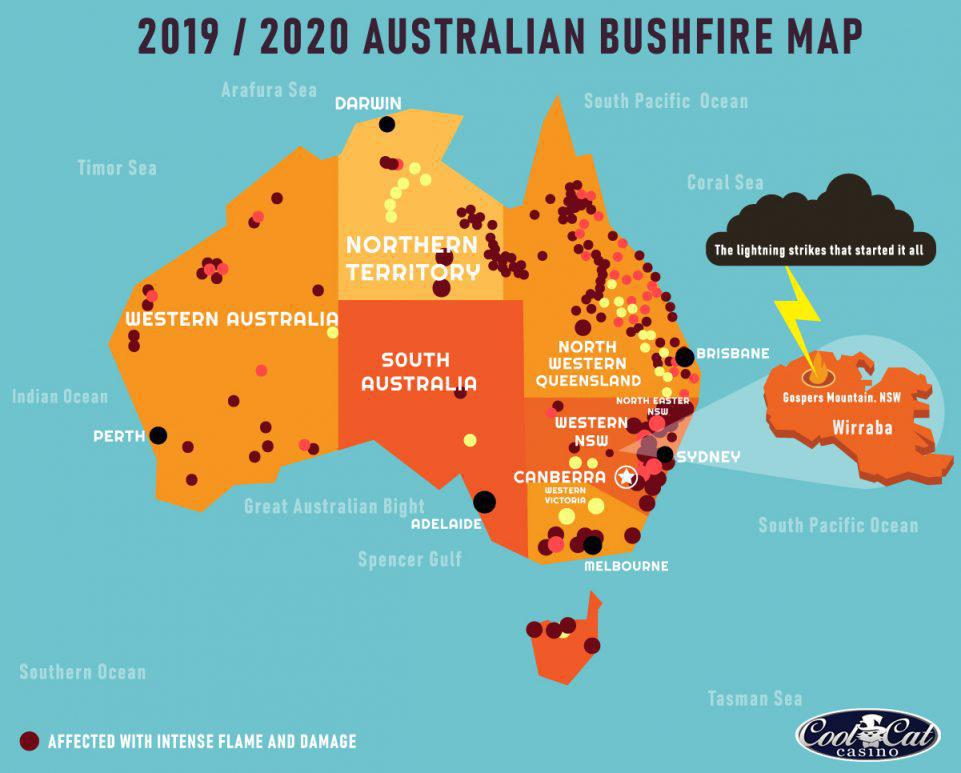 In late October 2019, lightning struck in an area of dried-out grass and trees in Gospers Mountain, New South Wales. In the southern hemisphere, winters are warm and dry. Many consecutive winters with no rain dried out the area so severely that it became a tinderbox and a disaster waiting to happen. The Gospers Mountain fire became Australia’s largest bushfire as it continues to burn to this day. A sudden burst of rainfall along with the efforts of thousands of firefighters has made an impact on the fires, but they are still burning. 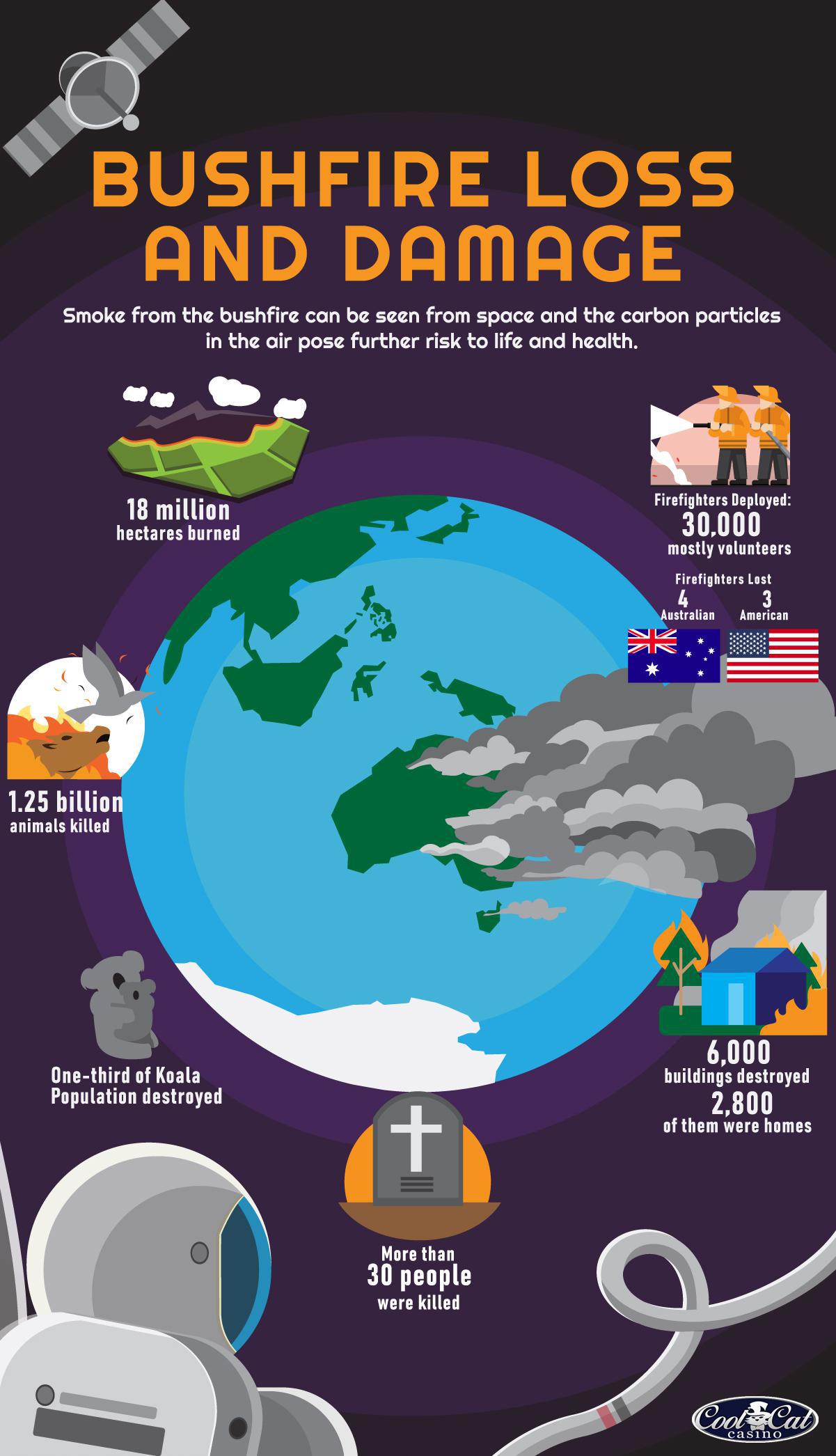 Another Killer on the Loose

In a strange twist of fate, one species of animal has made the disaster worse: cats. Their cute exterior hides dark behavior. They kill off every wounded animal they can find in the wake of the fire.

According to one report on Wired.com, cats are “a scourge of the highest order.” In the U.S., free-roaming domestic cats kill 3.7 billion birds and 20.7 billion mammals a year – not even counting reptiles. And they don’t just kill for food. They kill for sport, torturing the little animals before killing them.

In Australia, wild cats are attracted to burn scars, and they journey miles to pounce on wounded animals hiding in burrows after being dazed from the blaze. And the problem is getting worse. Australia is choking on cats, with up to 100 cats per square kilometer. But since cats aren’t native to Australia, the local wildlife has not evolved the skills to evade them. Add to that a massive bushfire season, and the killer cats of Australia are not cool cats at all.

The feral cat population in Australia is estimated at between 2 and 6 million. The damage to the natural order of the country prompted the government to launch a war on cats. According to CNN, a council in Queensland is offering a $10 bounty for each feral cat scalp.

PETA is not amused, calling the Aussie government’s actions “cruel.”

The huge wild animal population in Australia has historically butt heads with the human population, most notably the dingo situation. Ranchers tired of having their livestock slaughtered by wild dingoes started killing them on site. But it took the building of the longest man-made structure in the world – the dingo fence – to help solve the problem.

The only thing that would make matters worse is if a deliberate misinformation campaign invaded the Australian media with lies and false reports of the damage as part of a climate change denial agenda.

But that’s exactly what has happened. After the right-wing media circulated false reports that the fire was caused by arsonists and had nothing to do with climate change, former Australian Prime Minister Malcolm Turnbull wrote a scathing op-ed piece for Time.

“In Australia, as in the U.S., this issue has been hijacked by a toxic, climate-denying alliance of right-wing politics and media (much of it owned by Rupert Murdoch), as well as vested business interests, especially in the coal industry,” Turnbull wrote.

After the false reports of arson were circulated, scientists released proof that the latest fires were caused by a lightning strike in Gospers Mountain, New South Wales.

Fortunately, the fire relief donations have been pouring in. From single donations by Australia’s billionaires to millions of dollars in smaller gifts from individuals, fire-scorched Australia is feeling the global love. And the ways people and groups have chosen to spread the message range from classic pleas for help to outrageous social media experiments.

The owner of the Crown Casino, James Packer, was one of the first billionaires to donate to the fire relief cause. He donated $5 million to various fire relief efforts like the New South Wales Rural Fire Service.

And Packer isn’t the only gambler with a giving heart. World Poker Tour hostess Lynn Gilmartin set up a Facebook fundraiser called Poker Players for Australian Wildlife. And the donations rained down like coins from a slot jackpot. The latest figures showed the fundraiser raked in over $100,000 in private donations from poker players around the world.

The most unusual idea for a charitable contribution was the smoke-stained cap actor Russell Crowe wore while cleaning out his fire-damaged property. The actor set up an auction that went viral on social media and raised $400,000 for charities. Other Australian celebrities like Chris Hemsworth and Nicole Kidman also plunked down some cash for the cause.

In addition to gathering more than $50 million in donations through her Facebook fundraiser (the largest amount ever raised through Facebook), Aussie comedian Celeste Barber really rallied the troops to the cause. Most notably, she called out some of Australia’s billionaires who she felt weren’t donating enough. Barber tweeted and called out the richest person in Australia, Gina Rinehart:

“Hey Gina Rinehart where the hell are you and all your money?! If you’re in Hawaii on a family holiday I’m going to flip a f——- table,” Barber tweeted.

Rinehart responded to the personal challenge by donating an unspecified amount to the cause. Maybe Barber should ask for the receipt.

Sometimes it pays to call out those in power. After public outrage over the misinformation campaign in Rupert Murdoch’s media outlets, the Murdoch family pledged to give $9 million toward fire relief efforts.

By far, the most outrageous charity campaign falls under the ‘not all heroes wear clothes’ category. Adult model Kaylen Ward raised over $700,000 in fire relief donations using only the bare necessities. In her case, it was an Instagram promise to send nude photos of herself to everyone who donated more than $10. She could have raised a lot more donations (and eyebrows) if Instagram hadn’t shut down her account.

The Australian bushfire of 2019/2020 is a global catastrophe that has drawn attention to an increasingly warmer climate, growing droughts, and drier conditions resulting in larger and deadlier bush fires. But it has also captured the hearts of a world of people gathering as one to lend a hand in times of great need. Some people have given millions, others have donated thousands. A celebrity gave the hat off his head and a model gave the clothes off her back.

Politicians argue and volunteer firefighters work for free while Australia burns. But there is always hope.